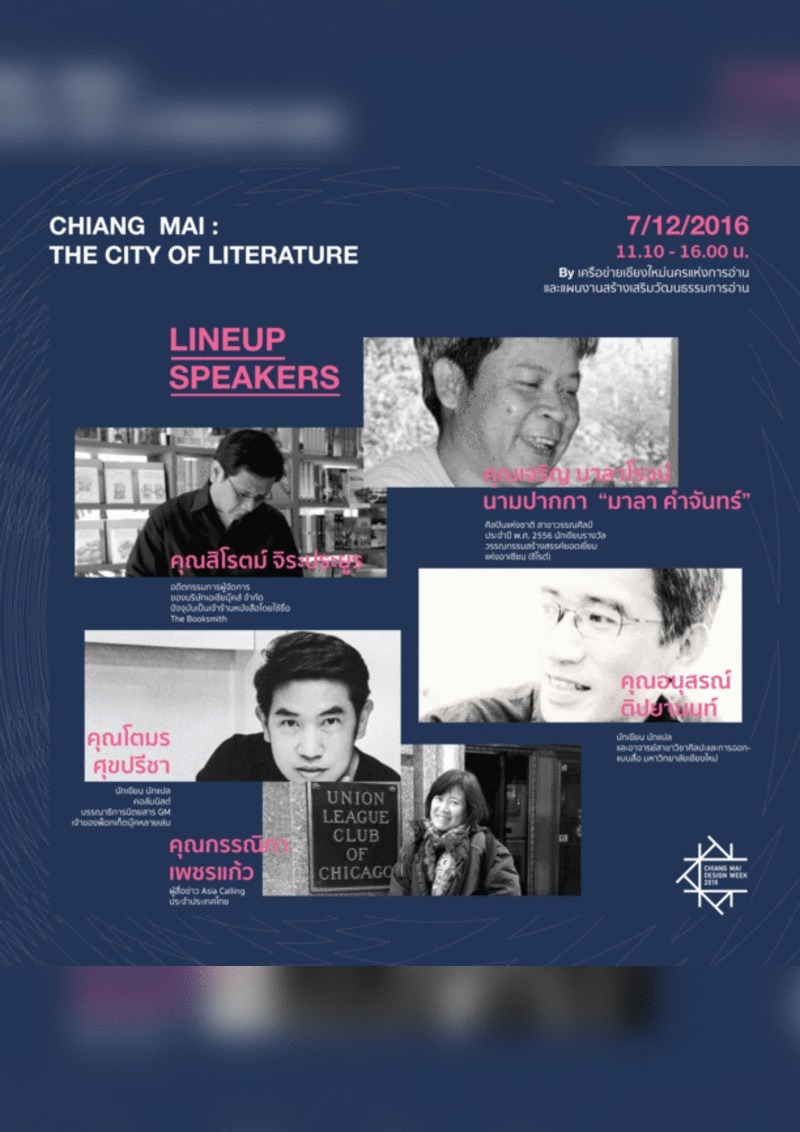 Conferences: Chang Mai-The City of Literature
Follow
66
Chang Mai: The City of Literature
Organizer: The group ‘Chiang Mai Arn’ in collaboration with the Reading Culture Promotion Plan, The Thai Health Promotion Foundation (ThaiHealth)
Chiang Mai Reading Group together with ThaiHealth are holding a talk about the direction of Chiang Mai literature and the factors affecting the growth of modern literature through the eyes of contemporary writers with extensive experience in the business of books and publishing.
Sirote Jiraprayul
The former managing director of Asiabook, co., ltd. The owner of Booksmith, an independent bookstore which imports quality books from abroad and introduce to Chiang Mai people. Sirote is also a columnist to ‘a day’ magazine and the one who select quality books for many leading libraries.
Mala Khamjan
A national artist for literature for the year 2013, the award-winning author for South East Asian Writers (S.E.A. Writers) from the book “Jaojanpomhom Nirajpratadintakwan” [translates: Jaojanpomhom, The Opus for Kyaikhtiyo]
Anusorn Tipyanon
An author, a translator, and a professor in Media Arts and Design major, Chiang Mai University. Anusorn has produced many novels and short stories. Most of his novels referenced scenes or historical events within countries in the South East Asian regions.
Tomorn Sookprecha
An author, a translator, and a moderator for the show ‘Wattanatum Chuppangtod’ [translated: deep fried culture] and the editor in chief of GM magazine. Tomorn has written many books which cover many issues such as history, social sciences, gender and sexuality, music, science, and travel.
Kannikar Petchkaew
Thailand Correspondent at Asia Calling