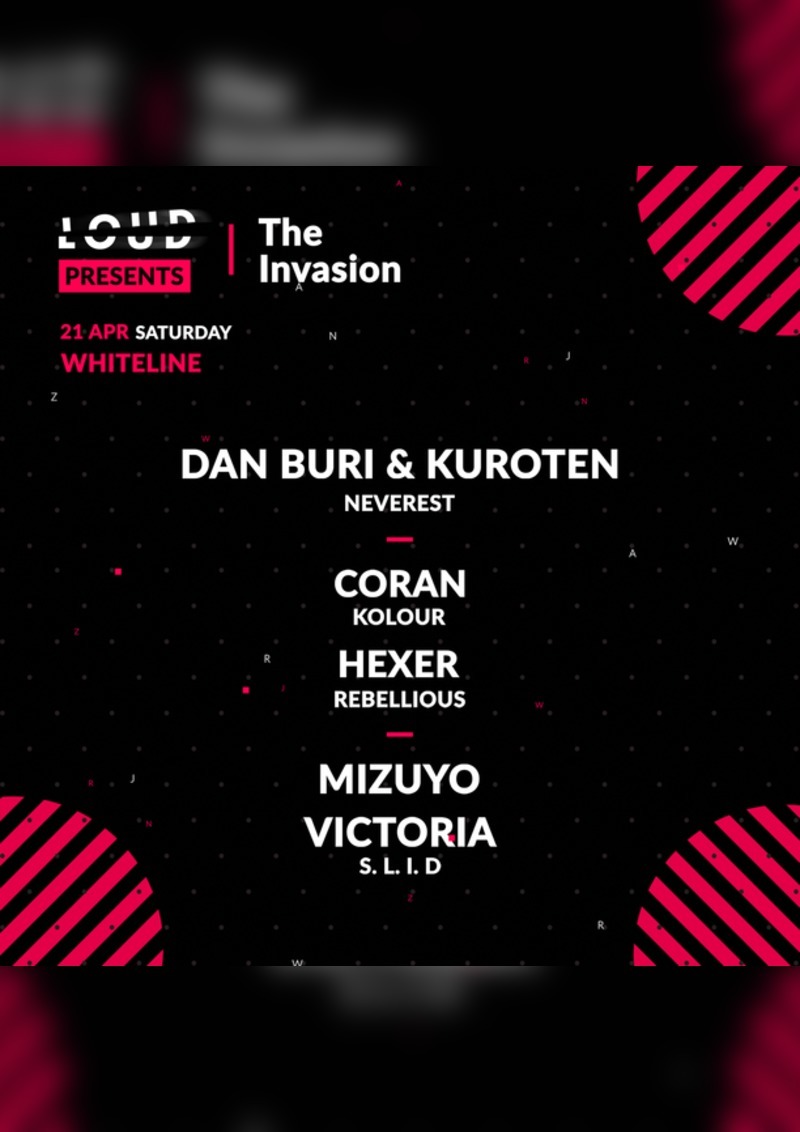 “When good music is needed it should be #LOUD...”
- (Some random guy, somewhere)

Loud is back! This time we’re bringing out the big guns…

Going on till the morning, so be here or be here, no second options! ;)

A late night juggernaut responsible for the proliferation of techno in Bangkok, Dan Buri is like the city having its own Berlin resident DJ at its helm. His German upbringing reverberates in the brooding yet melodic soundscapes that he plays but his Thai roots lend him a more lighthearted approach to everything that he does. In fact, whether he’s playing deep and undulated techno or organic tech house, his legacy in the city is defined by his high-octane performances and an unparalleled ability to engage and connect with the crowd. Notorious for pushing boundaries into nonexistence, Dan has crafted a career out of fusing together his many worlds in seamless and syncopated harmony. Career defining moments come from sharing stages with artists like Sven Väth, Dubfire, Joris Voorn, M.A.N.D.Y, Booka Shade and Azari & III, as well as playing some of the world’s most revered clubs like Tresor, Sisyphos, Time and Kyo. His current trajectory stations him in Europe for the summertime, regularly coasting through countries like Germany, Switzerland, Austria and France, while winters are spent in the warmer regions of Asia where he is bastion of its underground music culture. But regardless of where you find him, you will find his dance floor moving, bruising and sweating. Fired by passion and fueled by boundless energy, Dan exudes positive vibes and the mark he’s left on Bangkok’s underground music scene is both impactful and infectious. Finding that his production prowess had gone to the next level after linking with Bla Bla Music founder Daniel Sanchez, Dan found inspiration in Bangkok’s relentless after-hours affairs and finally breathed life into his own imprint. Aptly named Neverest Records, Dan has been questing tirelessly to create a family amongst Asia’s DJs and producers and build for the region a platform for sharing and connecting, not just within Asia but also with the world – always spreading the after-party ethos upon which Neverest was built.

With a music career spanning 10 years, Kuroten, a South African DJ and producer, is a rising star in the Asian underground scene.

His productions are emotive and bold, yet nuanced, while at their core is a deep passion for storytelling through sound.

Drawing on that same ethos, Kuroten’s sets push boundaries and constantly challenge his listeners, while taking them on a musical journey, a journey that has seen him play not only at all major Bangkok clubs but also at festivals including 808, Wonderfruit and Kolour.

Australian born Coran is at the forefront of Bangkok’s fast-growing underground scene.

While his skills as a DJ have contributed to his rise through the ranks, it’s his avid work ethic and undying love that gives his success a solid and deep-rooted foundation.

Since 2011 Coran has hosted over 70 events in Bangkok alone. A catalyst for the introduction of underground music culture in this city, his influence has brought DJs such as the legendary Sven Vath, Moonbootica, Gregor Tresher, Super Flu, Robosonic, Nakadia and Rampa to play at his events.

You’ve probably heard of his feature event – Kolour – which has seen over 18,000 patrons since its conception, and has sold-out for the last 2 years running, becoming Bangkok’s most celebrated and known day-event series. In early 2015 Kolour took a huge leap and hosted Bangkok’s first open-air techno festival called Kolour In The Park. With over 2400 in attendance, to say it was a hit would be an understatement.

Coran’s sound is groove heavy house and techno favouring rolling bass lines over huge drops -it’s all about the journey. Having cut his teeth playing 7 hour+ sets in Thailand’s notorious Full Moon party back in 2009, Coran is a big fan of long sets. With over 9 years DJ experience, 3 active music events, a festival and a club night, Coran is ready to take Asia and the dance floor to new levels!

Growing-up on metal and Punk roots, Hexer was first exposed to electronic music in the mid 2000’s. Inspired by acid-infused 90's techno, he started his DJ career in Turkey’s vibrant basement club scene.

His first big DJ gig was back in 2008, in Istanbul’s infamous Temple club. Since then Hexer has performed more than 500 gigs in Istanbul, Prague, Bangkok, Penang, Hong Kong and many other cities & countries.

Hexer relocated to Bangkok in 2016 and swiftly became established in its rapidly growing underground scene, becoming a familiar face amongst its highly talented local & international artists. Currently a very active member of this scene, it has helped him a lot in improving both his DJing & Production knowledge through collaborating with other artists.

Becoming a DJ was just the beginning for Hexer. He has been an active producer for the last 2 years and his debut EP – The Rave Method - is due to be released on Rebellious Records in April 2018. As a former bass guitarist in local punk-hardcore band, Hexer defines his signature sounds are “Kicks that must slap your face while bass-lines are tripping in your body”.

Although he describes his style as “Eclectic like nature,” he feels the most comfortable expressing himself and his skills through Techno. He aims to have more releases in the near future, while at the same time practicing daily to improve his overall sound.

A Japanese DJ from Yokohama City, Mizuyo grew up with world music, soon falling in love with black music culture she kickstarted her DJ career in the year 2000.

It was during this time that she met her crew in Yokohama, who introduced her to turntable culture, skateboarding, percussion and both Cuban and Brazilian music. The heavy influence this crew gave DJ Mizuyo prompted her to start making Afro-parties in Tokyo under the name "Shrine".

Mizuyo’s DJ style is cross-genre, seamlessly mixing hip hop to dance music, house, reggae and latin. Regardless of the genre she takes on quality music and attracts people worldwide with her flexibility, creativity and dynamism. As can be expected from a world-class DJ, she has her own twist on "world-fusion" dropping rare exotic tunes that are only heard on local street corners.

Based in Bangkok since 2010, Mizuyo is pursuing her music career energetically.

Her unique selection will make you feel positive yet peaceful, showing a true reflection of her colourful personality through her sound.

As a professional scientist by day and a DJ by night, to say Victoria has a unique profession would be selling her short. After working all day in a lab, it was in the club that she recently discovered her true calling – making people dance. Her signature sound is Deep Progressive Techno which has quickly brought her to the forefront of Bangkok’s thriving nightlife scene.

Her passion for music has been the catalyst for how far she has come, allowing her to share the stage with many top local and international DJs.

- Tickets cannot be replaced if lost, stolen or destroyed, and are valid only for the event.

- Tickets are non-returnable, non-refundable and non-exchangeable.