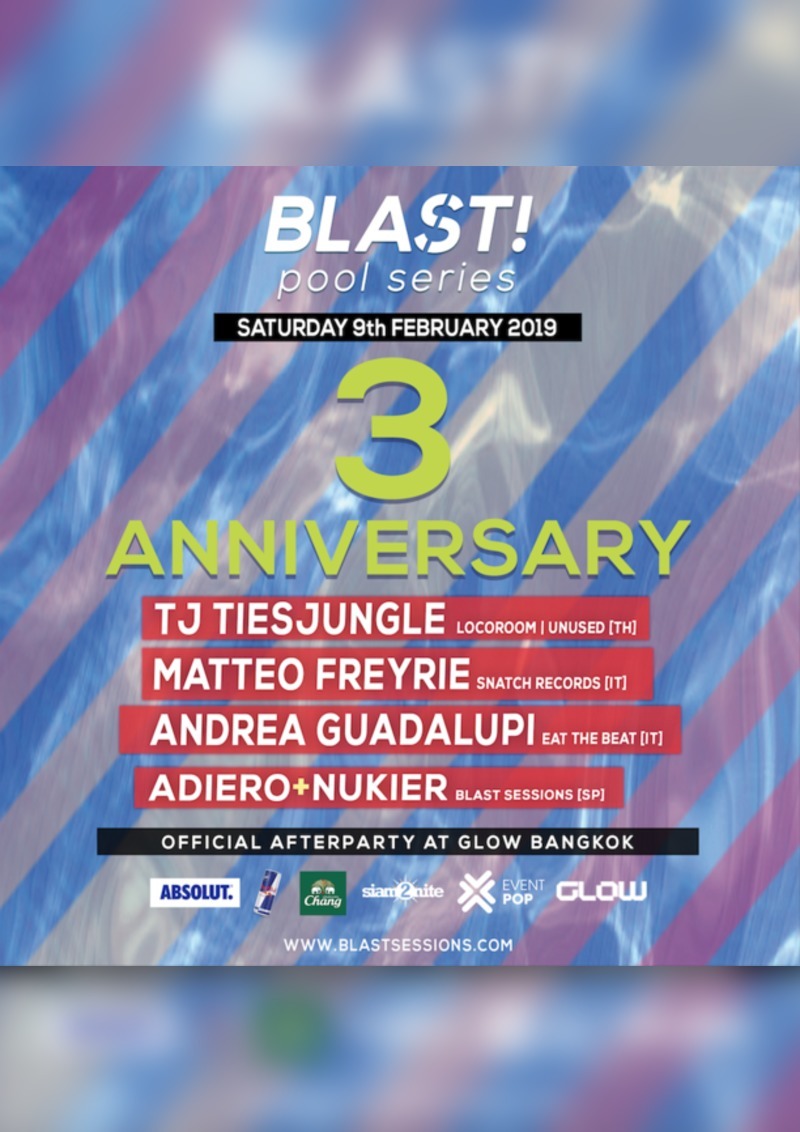 Blast Pool Series "3 YEARS ANNIVERSARY" - 9th Feb 2019
Follow
0
¡¡¡¡ LET'S CELEBRATE BLAST 3 YEARS ANNIVERSARY !!!!
Next Saturday 9th February! Don't miss the chance to live a unique party with the best Dj's, the most incredible show and the best Pool-side venue.
Don't let anybody tell you about the greatest Techno & House day-time party in Bangkok and be part of the story.
ARTIST LINE UP
TJ TIESJUNGLE ( Loco Room / Unused, TH)
Tj Tiesjungle entered into the world of Dj back in early 2000. Welll Known in Thailand for his Loco Room & Unused parties, sharing decks with artists like Nakadia, he have played at Mystic Festival Thailand, Waterzonic, 808 Festival, Wonderfruit, Baba Beach Club among others...
https://www.facebook.com/TjTiesjungleFanPage
https://soundcloud.com/tiesjungle
https://www.residentadvisor.net/dj/tjtiesjungle
MATTEO FREYRIE (Eat The Beat, IT)
Matteo Freyrie DJ ,born in Milan, Italy, In 2014 he move his base on the opposite side of the world in Melbourne, Australia where he starts to express himself, releasing tracks on Riva Star’s Label Snatch Records or Klaphouse Records. He starts his partnership and residency at Eat The Beat based at New Guernica Club playing along many international artists such us David Herrero, Alberto Ruiz, Supernova, Toru Ikemotu, Robert Babicz, Pirupa, Paco S, Nick Fanciulli, Nastia and many more...
soundcloud.com/matteofre
residentadvisor.net/dj/matteofreyrie
beatport.com/artist/matteo-freyrie/649662
ANDREA GUADALUPI (Eat The Beat, IT)
Andrea Guadalupi, Born in his beloved Puglia, south Italy, He has always been following his passion with the core belief that: “ Music is the greatest way to connect people”. Since 2015 he is living in Melbourne, Australia and his project is born follow on the heels of Eat The Beat, a well-known music event agency based at New Guernica club.
ADIERO+NUKIER (Blast Sessions, SP)
Adiero + Nukier are Spanish duo based in Bangkok. They carved a path for themselves in Bangkok with a series of electronic music events under the name of Blast Sessions.
➞ https://www.facebook.com/AdieroMusicOfficial
➞ https://www.facebook.com/DjNukierOfficial
---------------------------
Door price
➞ Regular Ticket 400THB (incl. 1 welcome drink)
➞ Free Flow Package 800THB (incl. 1 hour free flow of Beer & Wine)
Promotions
➞ Girls Free entry 2PM - 3PM
➞ "Sangria OPEN BAR" 2PM - 3PM
AFTERPARTY at GLOW BANGKOK
Show your Blast wristband and get Free entry before midnight.
--------------------------------
097 289 6983 & reservations@blastsessions.com