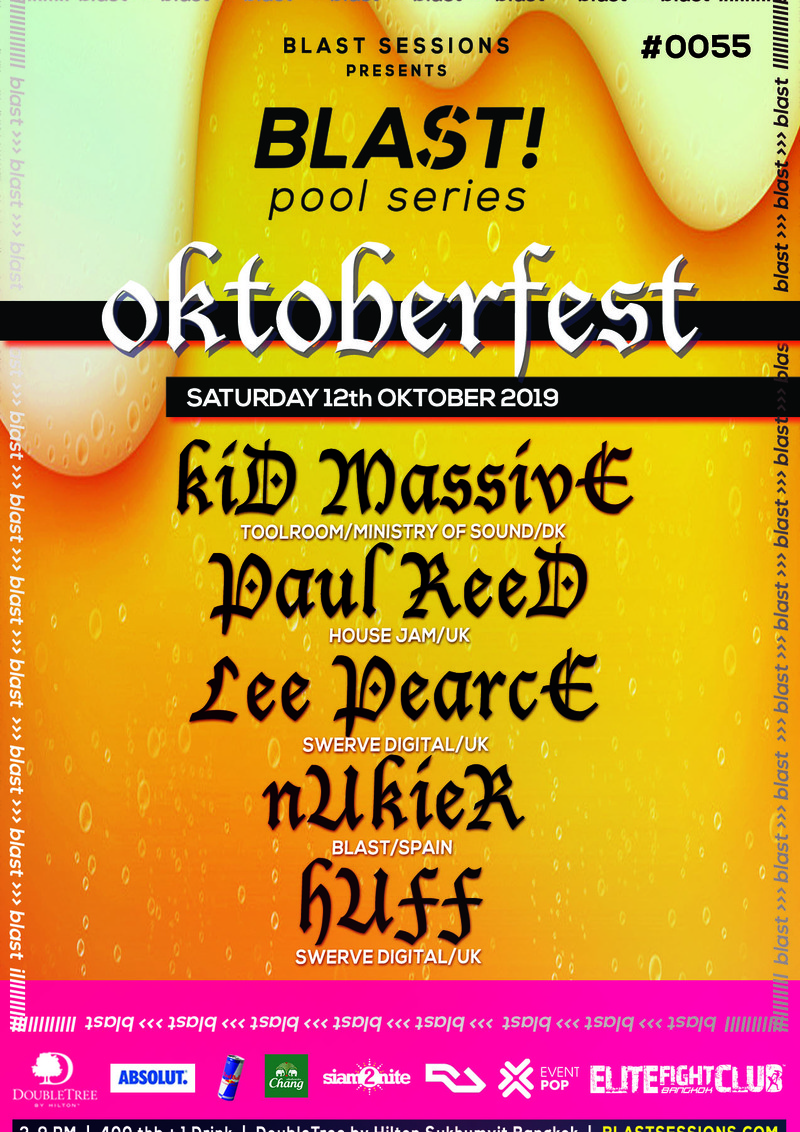 Blast Pool Series #0055 | Oktoberfest 2019
Follow
0
JOIN US ✖ JOIN BLAST 💦
SATURDAY 12th OCTOBER 2019
#best techno-house open-air party in Bangkok at our favorite venue DoubleTree by Hilton Sukhumvit
✖ ✖ ✖ ✖ ✖ ✖ ✖ ✖ ✖ ✖ ✖ ✖ ✖
➜COVER CHARGE:
400 THB + 1 welcome drink (Absolut + Red Bull)
➜DOORS:
14:00 PM - 21:00 PM
✖ ✖ ✖ ✖ ✖ ✖ ✖ ✖ ✖ ✖ ✖ ✖ ✖
ARTIST LINE UP _____
➜ Kid Massive | Toolroom Records, Ministry of Sound (DK)
Proudly flying the flag for Denmark and electronic music, this international producer has had quite the impressive career to date. With productions supported by the big room dance elite such as Fatboy Slim, Mark Knight, Dennis Ferrer, MK, Prok & Fitch and others...from WOMB (Official) Japan, to WALL LOUNGE Miami, Marquee Sydney, Ministry of Sound Club London and a whole host of clubs in between, Kid Massive continues to apply his energetic and passionate sets to dance floors across the world. He is also no stranger to even larger audiences, having headlined the dance stage at Japan’s largest festival Fuji Rock Festival, Serbia’s Exit Festival, and Brighton Pride Festival to name but a few.
www.mixcloud.com/kidmassive
www.soundcloud.com/kidmassive
www.instagram.com/kidmassive
➜ Nukier | Blast Sessions (Spain)
Nukier is a promising name of Asia's techno scene, active underground event organiser based in Thailand under the name of Blast Sessions
https://soundcloud.com/djnukier
www.residentadvisor.net/dj/nukier
➜ Paul Reed | House Jam (UK)
DJ, Promoter, Entertainment manager and electronic music enthusiast, one of the front men of House Jam, hails out of Northeast of England, already established name on the Bangkok and Pattaya circuit for House and Tech music, recognised mainly from residencies at venues such as BEAM , Cocoon Pattaya and as of recent Café del Mar Pattaya, as well as playing in many of the top venues around the city.
www.mixcloud.com/paul_reed
www.soundcloud.com/paul_reed
➜ Lee Pearce | Swerve Digital (UK)
House Producer/DJ from the west midlands. He has played in prestigious underground clubs as Egg London or Sankeys and he is also the owner of FXtion Records and Swerve Digital records.
https://soundcloud.com/leepearce
➜ HUFF | Swerve Digital (UK)
Huff has now been recognised with repeat bookings over the last three years for Hideout Festival (Croatia) & Snowbombing Festival, Mayrhofen (Austria) – two of the standout weeks in the festivals calendar. Combined with appearances at Manchester THE WAREHOUSE PROJECT, Ibiza and regular UK bookings, Huff’s reputation continues to rise and stature of bookings increasing.
Over the last three years Huff has taken on A&R at Swerve Digital where he is able to bring his passion of music live within a label. Working with major artists such as; Harry Romero, Luca Donzelli, Hauswerks as well as developing young UK talent – the label is on the rise.
https://soundcloud.com/huff_uk
Powered by Absolut | Red Bull | Chang World | Siam2nite | Eventpop | Elite Fight Club, Bangkok
✖ ✖ ✖ ✖ ✖ ✖ ✖ ✖ ✖ ✖ ✖ ✖ ✖
👉 BEER PROMOTION BUY 1 GET 1 FREE before 5 PM
👉 Open Bar #SANGRIA before 3 PM
👉 Ladies #FREE entry before 3 PM
🎟 Tickets: www.eventpop.me/e/6388-blastoktoberfest
🎟 RSVP & VIP packages: reservations@blastsessions.com
✖ ✖ ✖ ✖ ✖ ✖ ✖ ✖ ✖ ✖ ✖ ✖ ✖
LINE ID: blastsessions
www.blastsessions.com