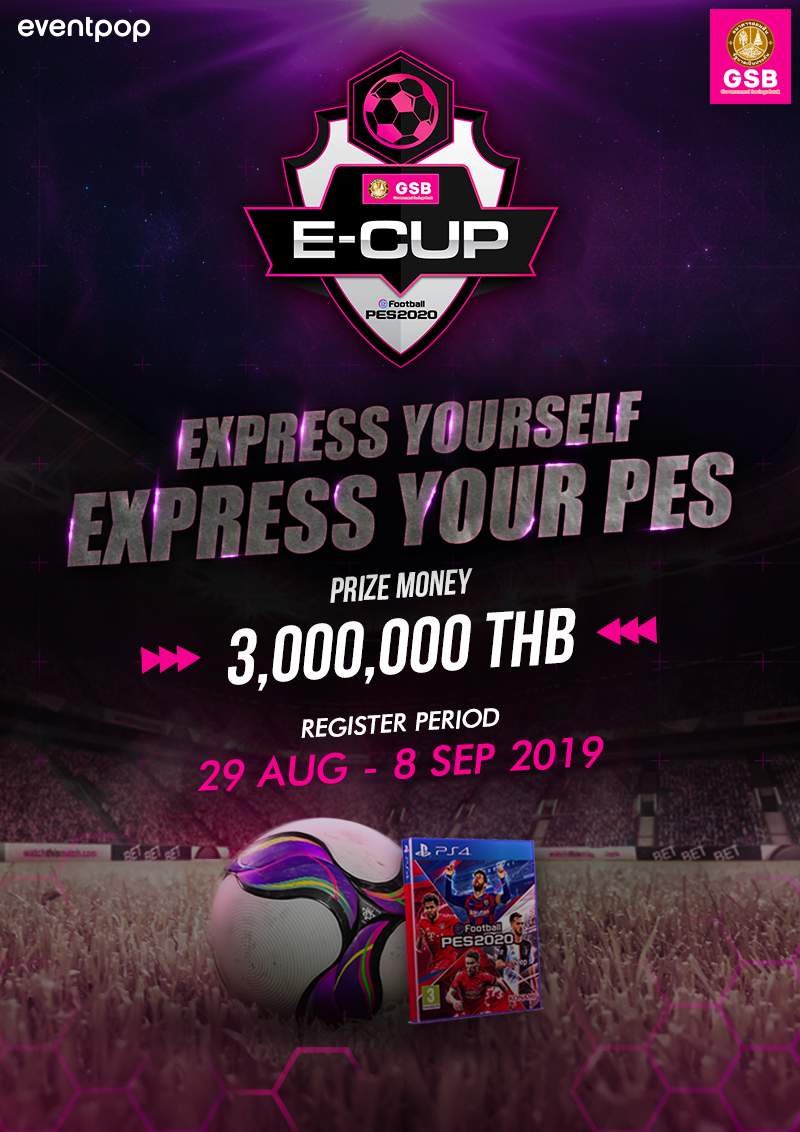 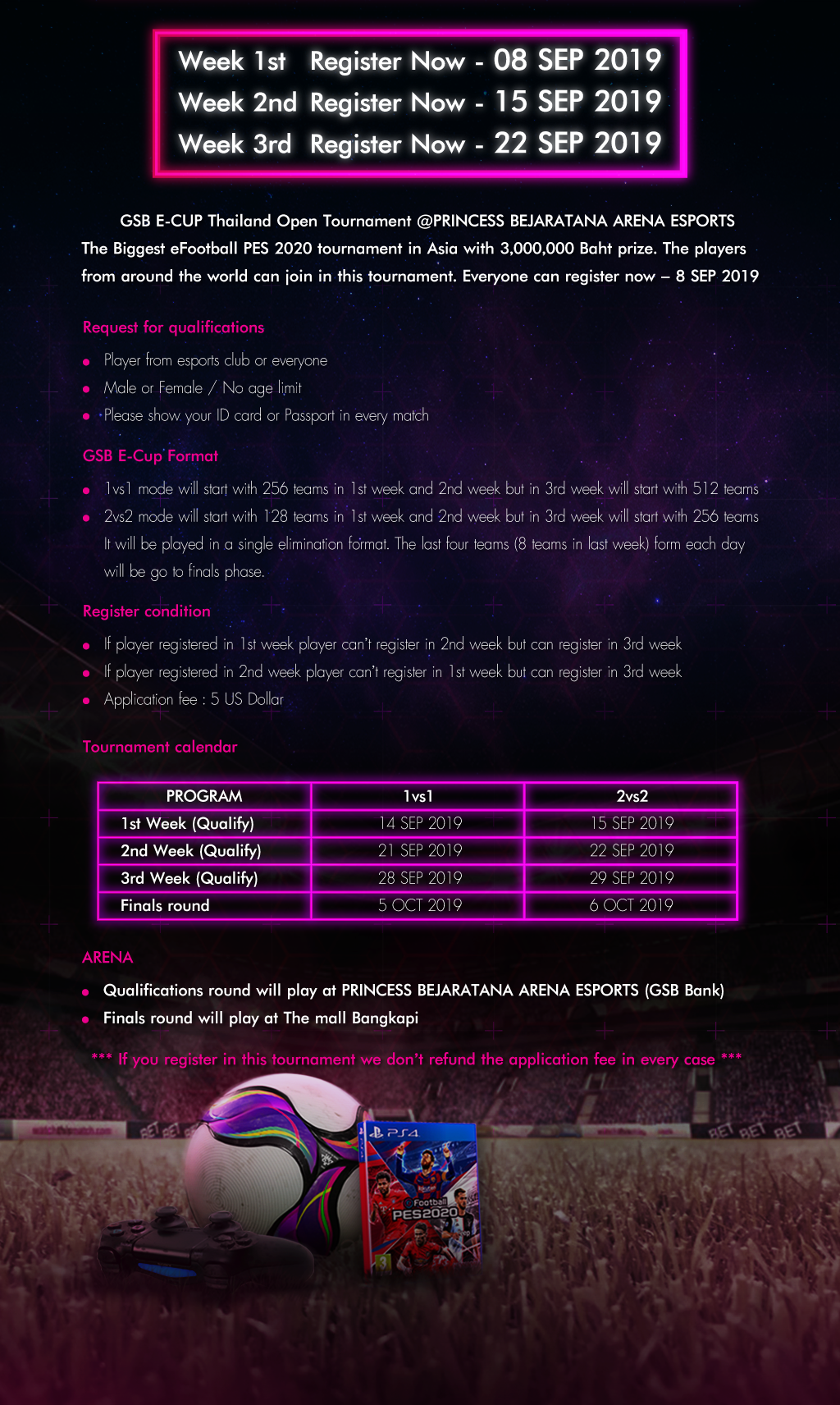 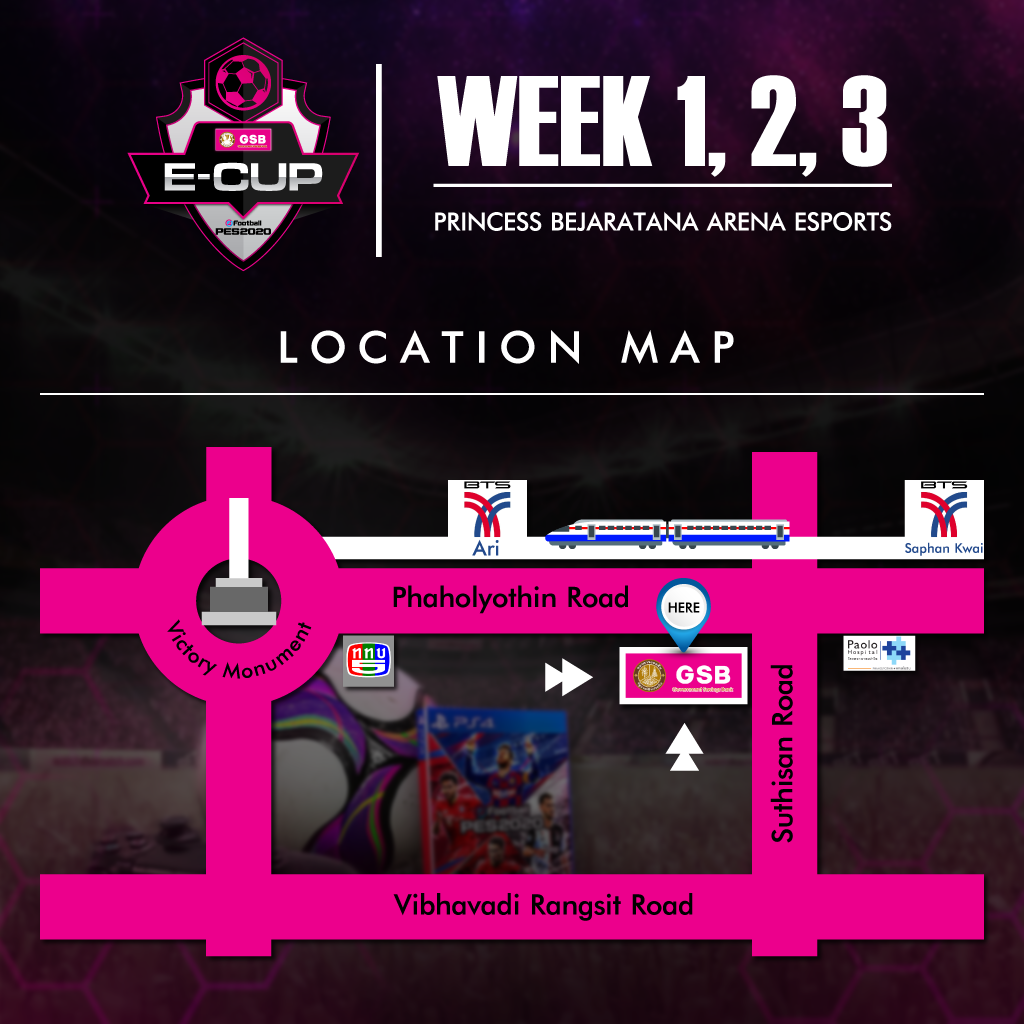 1.1 Definition
The GSB E-Cup is an international tournament play on the eFootball PES2020 video game edited by KONAMI.
It will take three weeks to find the best 16 teams from 1vs1 and 2vs2 go to the final stage in the fourth week.
2. GSB E-Cup Tournament Areas
2.1 Tournament area
The Tournament Area comprises the gaming area where the Players compete and the Referee stands.
2.1.1 Access
The Tournament Area open to Players which have a Match to play. Players and who do not have a Match to play, as well as spectators and media, are forbidden from entering the Tournament Area. Only the GSB E-Cup staff and other authorised staff can stay inside the Tournament Area.
3.Tournament
3.1.1 Video Game Version
- The tournament will use the latest Patch of eFootball PES2020 and use Uniform Overall Ratings.
3.1.2 Clubs
- Players can use only clubs from Thai League.
3.1.3 Match Setting for 1vs1 and 2vs2
- Match Level: Superstar
- Match Time: 10 Min
- Injuries: Off
- No. of sub: 3
- Extra Time: On
- PK: On
- Stadium: PES LEAGUE STADIUM
- Daytime: Night
- Weather: Summer/Fine
- Balanced Stats: ON
3.1.3.1 Video game speed setting
- Game Speed: Normal / 0
3.1.3.2 Camera setting
- Multiplayer Camera: Dynamic Wide
- Camera settings: Dynamic Wide
3.2 Before the Match
3.2.1 Match start time
- The Match start time indicates the time when the Match begins. Therefore, Players are advised to be at the Tournament Area at least 30 minutes before their Match start time
3.3 During Match
3.3.1 Between Matches
An official Match can only be started and played when the tournament Referee has given the signal to start. Any Match started without the approval of the Referee will be considered as a non-official Match.
When the tournament Referee has given the signal to start, Players have three (3) minutes after the signal to be setting your game plan and start the Match.
3.3.2 In-game pause
Players can pause the video game to change strategy and Players have only three times per Match and when the video game action is stopped (ie: offside, touchline, fouls, etc.).
If players have technical issues (ie: Joystick ,delay or etc.) players can pause video game when the video game action is stopped
3.3.3 Momentum interruption
If the Momentum is involuntary interrupted (Game crashes, server crashes, network cuts, power outage …) the tournament officials will decide whether or not to replay the Match.
If the Match must be replayed, it will be replayed according to the following rules:
- If both teams have not scored any goal during the first half-time (0-45 mins + extra time) of any of the Games, the whole Game (and the following if applies) will be replayed.
- If the problem happened during the first time (0-45 mins + extra time) of a Game after the first goal was scored, the Game will be restarted with the second half-time. The goals scored in the first half-time will be added to the ones scored in the second and the sum will be the final score of the Game.
- If the problem happened during the second half (45-90 mins + extra time) of a Game, the game will be restarted with only the second half-time. The goals scored in the first half-time will be added to the ones scored in the second and the sum will be the final score of the Game.
But If the players make problem to interruption the tournament officials will decide according to the following 4.1 Forbidden behaviours rules
3.4 After Match
3.4.1 Score validation
After a match referee will report the match score to player and sign the match report document (paper or electronic).
After signing the Match Report document, the result is final.
3.5 GSB E-CUP format
3.5.1 Format overview
Tournament will start with 256 teams in 1vs1 and 128 teams in 2vs2. It will be played in a single elimination format. The last four teams (8 teams in last week) form each day will be go to finals phase.
3.5.2 Final Phase Rules
The finals will have 16 teams in Round of 16 – Round of 8 will be played in single elimination format and Round of 4 will played in Best of 3 format.
3.6 Tournament materials
The organiser (GSB E-CUP) will provide the following materials
- Console
- Television / Monitor
- Joystick
- Chairs
3.6.1 Prohibited materials
Player can’t connect non-essential equipment, such as cell phone, USB Key, Flash drive or MP3 device to the console.
4. Conduct Rules
4.1 Forbidden behaviours
Players or managers will be penalised if they are found attempting to somehow infringe any rule. The following is a list of forbidden behaviors:
- Refuse to follow Referee instructions.
- Arrive late at their schedule commitments.
- Show dissent by word or action.
- Use insulting language and/or gestures.
- Use insulting language in-game.
- Perform unsporting behavior.
- Mislead on their identity (fake nickname or identity usurpation).
- Mislead or dupe the Referee.
- Don't put any effort to win Match.
Furthermore Players or any third party involved in the team may not take part, either directly or indirectly, in betting or gambling on any results of any Tournament (including Regular League, Last Chance Group and Finals).
The nature and scope of the penalty imposed due to such violations will be at the sole discretion of the Referee and tournament director.
4.2 Penalties policy
4.2.1 List of penalties
After discovery of some Player or Manager committing any violations of the present rules, the Regulations Committee may apply the following penalties:
- Verbal warning x2
- Match loss
- Disqualification
Depending on the degree, repetition and the final analysis, the Regulations Committee may apply additional penalties such as banishment from future tournament by GSB, removal of all cash prizes and awards or legal proceedings. The referee or committee decision is final.
5. Rules Update
GSB E-Cup reserves the right to change or modify these Rules at any time for the good functioning of the tournament. GSB E-Cup encourages everyone to review these regulations from time to time in order to be apprised of any changes.
*** If you register in this tournament we don’t refund the application fee in every case ***
***If player registered in this tournament it mean you accept the rules***
The payment by bank transfer process will be done in a few days **please upload your Pay-in Slip to confirm your payment**