So we are told:
O X A will rise to us on SUNDAY 29th DECEMBER 2019 with our special edition,

∞ ANDREW KAY ∞
(Lowerhand Rec. | Studio 338 - London, Uk)
Long-standing Studio 338 resident and Lowerhand Records label-owner, Andrew Kay, is no newcomer to the world of House & Techno. A regular on some of the world’s biggest clubbing brands, Andrew has proven time-and-time again that he can go toe-to-toe (or should we say USB-to-USB) with some of the biggest names in the industry.
With a varied style that encompasses many aspects of underground electronic music, Andrew is comfortable playing for different brands and has resulted in him being on line-ups for parties such as Music On, Desolat, Cocoon, Elrow, Sankeys and Space Ibiza to name but a few.
Aside from tearing up dancefloors around the country, you’ll also find Andrew in the studio working on production or managing his own label, Lowerhand Records, which has enjoyed four No.1 releases and nine Top.10 releases on Beatport.
With music production becoming a more integral part of Andrew's career, expect to see more releases with some exciting labels for this London-based DJ and Producer.

∞ SUISS ∞
(Outta Limits Rec. | Revolt Music - Usa)
Originally from Washington DC and now traveling the world, Suiss is a young and energetic DJ and Producer with a focus on Melodic Techno & House music. Despite his young age, he is not lacking in experience. His high-energy show has been seen by thousands of people in top clubs and venues throughout the world such as: Cat & Dog, Halfmoon Festival, Hangar 11, Clara Tel Aviv, Alcatraz Milano, Dreambeats Festival , LSE London, The Qube in Victoria Lost Paradise Koh Phangan, Lighthouse Phangan, and many more. Suiss continues to release chart topping tracks with high energy vocals, hitting views of up to 4 million on his productions.
Recently Suiss was a guest on TEDXIDC, a world-renowned show, to talk about his personal life and DJ Career.
Suiss always aims for a unique sound in his production and a unique show in the DJ booth. His tracks have his talent and passion sewn into them, and his performance as a DJ is dynamic and entertaining to the point that you can feel that you are in the presence of a star.
Suiss provides music you can feel and not just hear.
https://soundcloud.com/suissofficial
https://www.facebook.com/suiss/

∞ DAVA DI TOMA ∞
(Planet Ibiza | BHM Record | Bonzai Record - Ibiza / Bel)
Dj producer,manager & event organizer,born in Belgium from Italian & Belgian parents. He start to play at the age of 16 when he organise "New Wave" Parties at this time. When the "New Beat" and "House" movement made appearance in Belgium he started to play as guest Dj in best clubs & different places. Furthermore he Played in the most famous club in Belgium & parties…Resident Dj From 1990 till 2010 in the best Belgian clubs like Mackenzie,La Rocca, Escape Concept, La Bush, Nova,Barocco…
Also played outside Belgium like Holland, Germany, Luxembourg, France, Ibiza, India, Thailand and many more. Played in the best Ibiza places like Bora Bora, Blue Marlin and many more.
Artist from Chrom Recordings Ibiza,SecondSun group & Planet Ibiza from 2015. From 2016 Dava now is Event Manager for Planet Ibiza.
Dava have also have his concept Superdope with some friends.
Dava had also different Radio Show on Beachgroove Radio & Vicious Radio with Planet Ibiza. From April 2016 he is resident Dj on Kondo Beach Radio Show broadcasting on Zen Fm & Dance Tunes Radio. As producer Dava Di Toma also released his unique works on different labels worldwide like Bit Records Mexico,Housearth Spain,Bonzai,Faith Music,Enigma. Dava Di Toma is also a member of the famous Secondsun movement,located in Ibiza. His music styles is Deep House,Tech House,House,techno progressive with Tribal grooves.
https://www.facebook.com/davaditomagroup/
https://soundcloud.com/davaditoma
https://www.beatport.com/artist/dava-di-toma/87117

∞ ROB GRITTON ∞
(Moon Island Records | Jungle Exp. - Uk)
👉 http://www.beatport.com/artist/rob-gritton/273419 👈
After learning to mix as a teenager in a friends kitchen back in 1996 on a pair of 1210s, Rob Gritton realised his passion for dance music, However, it wasn't until moving from the UK to the 'party paradise island' of Koh Phangan, Thailand in 2005 that his DJ career really began. 2009 he opened the legendary Beach Lounge Bar in Haadrin, home to the world famous Full Moon Party, playing a mixture of underground house and techno and was quickly noticed for his DJ skills and impeccable music selection. It wasn't long before Rob was playing the bigger parties and festivals on the island, most notably Jungle Experience, where he has held a residency since 2010 playing to crowds of up to 8000. He also holds a monthly residency on the G Floor of the incredible Half Moon Festival and plays outstanding 6 hour sets every month at the uber popular Moon House at the world's largest monthly beach party-The Full Moon Party. Rob is also a regular face behind the decks at events across S.E.Asia, playing alongside some of the biggest names in house and techno.
Studio production was next on the list for Rob and after the completion of his own studio and a handful of releases on labels, he launched Moon Island Records in 2013 with his good friend, Anjuna Deep recording artist, Rory Gallagher. The label became the main platform to release his productions, and they so impressed Orbital’s Phil Hartnoll, that he asked Rob to join him in remixing Darren Emerson's 'What is it' which came out on Bulletdodge in 2017. The friendship continued with further remixes on the cool DeepDownDirty label, including JawJee - Enlightenment in 2018. 2019 has already been a good year, release wise most notably, so far, another colaboration this time with long term friend Jourdan Bordes and the track 'Rain Dancin', which came out on Phonetic Recordings and was charted in the BeatPort tech house hype chart. Rob’s solo work can also be found on a variety of other labels including Jungle Funk, Reflective Music, LW Recordings, Unseen Records Columbia, Vector Records 2.0, Soundwaves, RE:Vibe Music, RH2 and Taux Music.
'Living the dream' as a DJ/Producer/Label Owner/Event Organizer on Koh Phangan for over twelve years, Rob Gritton finally returns to the UK in 2019. The impending tour will include The Peach Reunion on 19th April and other notable gigs.
Having secured his place as one of S.E Asia’s biggest Dj’s, living and breathing underground house and techno, it won’t be too long before he makes his mark on the rest of the world.
http://www.beatport.com/artist/rob-gritton/273419
https://www.facebook.com/robert.gritton
https://soundcloud.com/dj-rob-gritton
http://www.mixcloud.com/DJ_Rob/
http://dj.beatport.com/djrobgritton
https://www.facebook.com/moonislandrecords/ 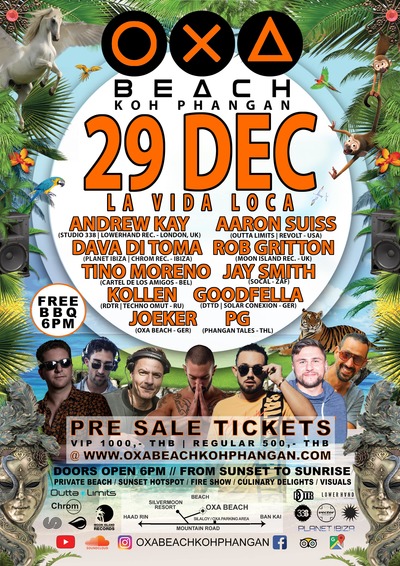