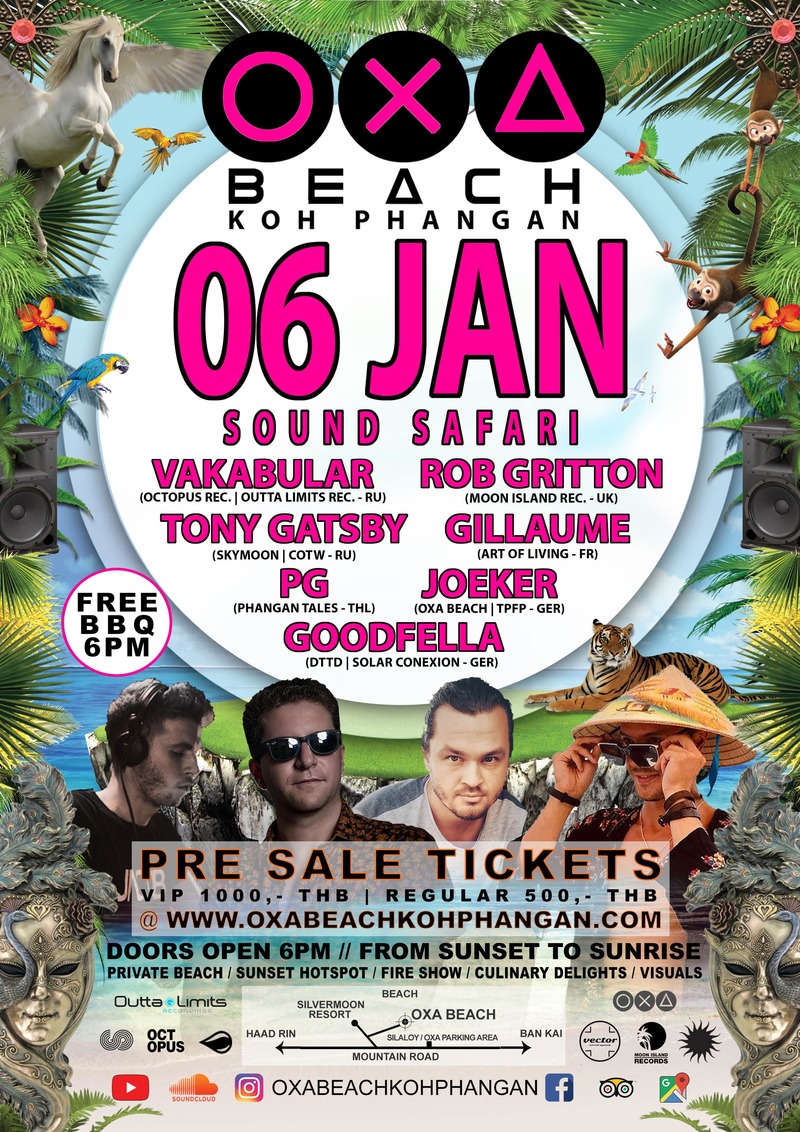 O X A will rise to us on MONDAY 6th JANUARY with a special,

∞ VAKABULAR ∞
( Outta Limits Rec. / Octupus Rec / Rapsol Berlin - Ru)
From the idyllic, sun-kissed island of Ko Pha-ngan in the Gulf of Thailand, Vakabular is a DJ and producer who has created quite a stir with his driving rhythms and club-friendly melodies. From an island renowned for its party culture, Vakabular has been a regular at events such as "Jungle Expirience", "Waterfall", "Guys Bar" and “360 Rooftop”. Playing in front of packed crowds, Vakabular has seen his music met with considerable success as he plays out his carefully constructed sets.
In tandem, a production career has also garnered considerable success. Almost a century of credits sits proudly next to the Vakabular name as he finds his work allied to some of the finest underground imprints. BC2, Krafted Records and Resopal Schallware have all featured a plethora of production material as the Thai producer makes audio waves across his homeland and beyond. Moreover, April 2017’s “Floor Damage” for Outta Limits, marked a high watermark for the Vakabular name as the six-track EP for the Stan Kolev and Matan Caspi led label provided a stunning techno showcase with “WWW” and “Floor Damage” going on to feature on the “Outta Limits Eclectic Frequencies” compilation.
Winning the last Beatport Remix Contest for Ron Costa and get released by Octopus Records - just small cherry on top of this cake.
www.soundcloud.com/vakabular
www.beatport.com/artist/vakabular/433716

∞ ROB GRITTON ∞
(Moon Island Records | Jungle Exp. - Uk)
👉 http://www.beatport.com/artist/rob-gritton/273419 👈
After learning to mix as a teenager in a friends kitchen back in 1996 on a pair of 1210s, Rob Gritton realised his passion for dance music, However, it wasn't until moving from the UK to the 'party paradise island' of Koh Phangan, Thailand in 2005 that his DJ career really began. 2009 he opened the legendary Beach Lounge Bar in Haadrin, home to the world famous Full Moon Party, playing a mixture of underground house and techno and was quickly noticed for his DJ skills and impeccable music selection. It wasn't long before Rob was playing the bigger parties and festivals on the island, most notably Jungle Experience, where he has held a residency since 2010 playing to crowds of up to 8000. He also holds a monthly residency on the G Floor of the incredible Half Moon Festival and plays outstanding 6 hour sets every month at the uber popular Moon House at the world's largest monthly beach party-The Full Moon Party. Rob is also a regular face behind the decks at events across S.E.Asia, playing alongside some of the biggest names in house and techno.
Studio production was next on the list for Rob and after the completion of his own studio and a handful of releases on labels, he launched Moon Island Records in 2013 with his good friend, Anjuna Deep recording artist, Rory Gallagher. The label became the main platform to release his productions, and they so impressed Orbital’s Phil Hartnoll, that he asked Rob to join him in remixing Darren Emerson's 'What is it' which came out on Bulletdodge in 2017. The friendship continued with further remixes on the cool DeepDownDirty label, including JawJee - Enlightenment in 2018. 2019 has already been a good year, release wise most notably, so far, another colaboration this time with long term friend Jourdan Bordes and the track 'Rain Dancin', which came out on Phonetic Recordings and was charted in the BeatPort tech house hype chart. Rob’s solo work can also be found on a variety of other labels including Jungle Funk, Reflective Music, LW Recordings, Unseen Records Columbia, Vector Records 2.0, Soundwaves, RE:Vibe Music, RH2 and Taux Music.
'Living the dream' as a DJ/Producer/Label Owner/Event Organizer on Koh Phangan for over twelve years, Rob Gritton finally returns to the UK in 2019. The impending tour will include The Peach Reunion on 19th April and other notable gigs.
Having secured his place as one of S.E Asia’s biggest Dj’s, living and breathing underground house and techno, it won’t be too long before he makes his mark on the rest of the world.
http://www.beatport.com/artist/rob-gritton/273419
https://www.facebook.com/robert.gritton
https://soundcloud.com/dj-rob-gritton
http://www.mixcloud.com/DJ_Rob/
http://dj.beatport.com/djrobgritton
https://www.facebook.com/moonislandrecords/