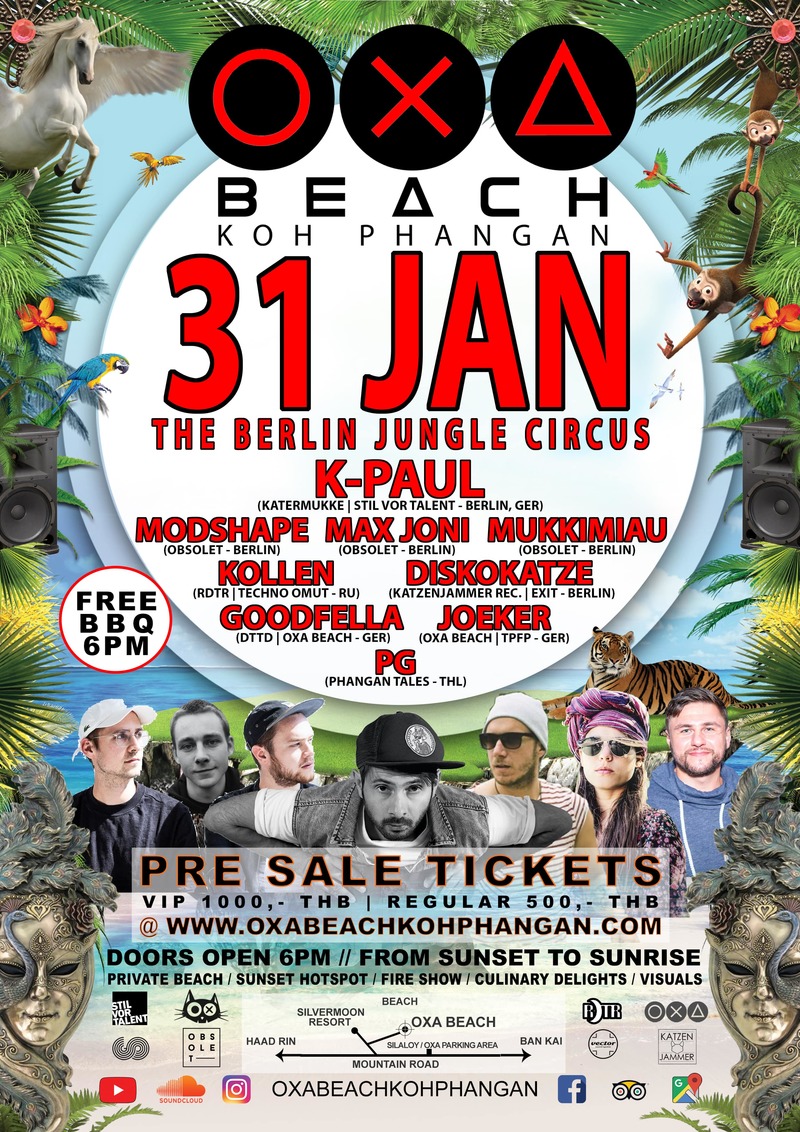 Unaffected by all the thunderous confusion dancing full of joy, countless multitudes of colorful fishes, glowstarfishes, glitterphangananemones, shimmering trumpet-crabs and sparkling unprecedented headdressed aquarists.
So we are told:

O X A will rise to us on FRIDAY 31st JANUARY 2020 with our special edition,

(Katermukke | Stil vor Talent | Lexy & K-Paul - Berlin)
He is a man of many names: K-Paul, Käosklub,Fuchs & Horn, Kai Paul from East Berlin and K-Paul, one half of Lexy & K-Paul. The dance music duo was founded in the 90s, during the golden Age of techno when the Love Parade was still hip, the Internet not bad yet, when parties were somehow more laid-back and minimal was not the hot shit yet. Freak. The Greatest DJ. Electric Kingdom.K-Paul proved himself as an expert studio wizard shaping the sound of the world’s most enduring and dynamic techno- electro-duo ever. He then decided to make an appearance not only as a producer and DJ but also as a performer. Not taken seriously at first, he needed to get the necessary stage experience. Is that possible? From club to stage? So without being a boring laptop nerd, he banged out what his MPC offered. At huge dance music events like Mayday, Love Parade, Time Warp, Sonne Mond Sterne the rock element was successfully integrated. And then, other remarkable things happened: 4 studio albums, Echo award fame, business trips around the world, liberation from his long-time mentor Westbam, new label, finding new fields of possible music realms.The duo Fuchs & Horn became the experimental field for music that does not really fit with Lexy & K-Paul. Some remarkable tracks emerge, for example “Störenfried” and “Es tropft”. T heir performance concept appeared to be more underground than before: Kai Paul seeked tension in choosing questionably legal locations and realized that masks on stage can be sexy.Kai Paul’s next evolutionary step was called Käosklub.At first, the threesome pretended to be chaotic, but they knew very well what they were doing. Kai Paul is accompanied by Mr. Kaldirim and Mr. Horn. Both are rather shy guys but mutate into veritable berserkers in the club. Electrified on stage, they bang out natural hymns like “Pas de temps” or zoological tracks like “The cat”.Beside Kai Paul’s artistic claim and professionalism, fun is the main focus on each and every project he does. This is something that no “How-to-become-an-entertainer” guide can teach you. Kai Paul always follows the motto: You can only bring fun to the audience when you love what you do. “We were never boring because we were never bored”. Kai Paul does not want to arrange himself in a cozy studio to reign over his machines. He is drawn to any imaginable live situation. It doesn’t matter to him whether there are 20.000 festival visitors or 200 sweaty figures in a dark cellar. See ya. Here or there.
https://soundcloud.com/lexykpaul
https://soundcloud.com/k-paul
∞ MAX JONI ∞

Max Joni was born in 1983 in East-Berlin. He grew up as a music loving teenager during the exciting times of the 19’90s and the fall of the Berlin Wall. His music path began with Hip Hip. In the end of the 2000s the nights are getting longer and „legs go heavy“ - Techno is in town. The first steps in electronic music were ghost productions. From that time on famous studio partners like Lexy&K- Paul, Daniele di Martino, Dayne S, Alle Farben, SoKool, M.A.N.D.Y., Ante Perry and YOUNOTUS worked with him and remixes for artists like "Lana del Rey" or "Moby" were produced by Max Joni. The sound is getting clubbier as Max Joni released on famous underground labels like "What I Play", „ZEHN“ and international
labels like „ULTRA Music“.
In 2018 he co-founded the label OBSOLET with his Studio buddies Nils Hoffmann, Modshape and Niklas Ibach and created a new party concept called „back2back“ for the famous Berlin club "Ritter Butzke“. Melodic
Techno and Afro House is now his home.
[ https://soundcloud.com/max-joni ]
[ https://www.facebook.com/MaxJoni.music/timeline ]
[ http://dj.beatport.com/max-joni ]
[ http://ultramusicmedia.com/artist/MTc2OTEtNGM5NmQ5/ ]

(Katzenjammer Rec. Berlin / EXIT / Jubeljahre Festival)
Diskokatze grew up on the coast of Germany and had his first experiences in nightlife when he was young. From year to year his love for electronic music grew and with it the desire for more.
The decision to move to Berlin, started his great adventure.
With a handful of friends, motivation and a vision, he started his first “Free Open-Air” in the bush of the green spaces of the capital in June 2018. Good sound, creatively designed floors with great attention to detail was and still is important to the collective , His distinctive skills in organizing, constructing and managing social media accounts, helped the open-air raves to grow successfully and quickly within one year.
After some experiences on the periphery of the electronic music scene, the will grew to enrich the own events musically as well as organization, decoration and administration.
Under the alias Diskokatze, he started mixing tracks, and he found his own style amazingly quickly.
Deep minimal tech, between 125 and 129 bpm, with driving, dominant basslines determine his sound. Self-created intros & isolated vocal parts give his sets their own, driving character.
With the foundation of the event label "Katzenjammer Records" in March 2019, the young Berlin resident created the basis for organizing and playing his own club event in Berlin and the rest of the republic.
Diskokatze has been part of the Jubeljahre Festival Family since last year. As a resident- dj and crew member, he takes on a musical and a organizational part.
https://www.facebook.com/Diskokatze/
https://soundcloud.com/diskokatze

∞ MODSHAPE. ∞
(Obsolet | What I Play - Berlin)
Modshape. is a Berlin based producer and DJ/Live Duo that is focussed on Melodic Techno.
https://soundcloud.com/modshape
https://www.facebook.com/modshape/