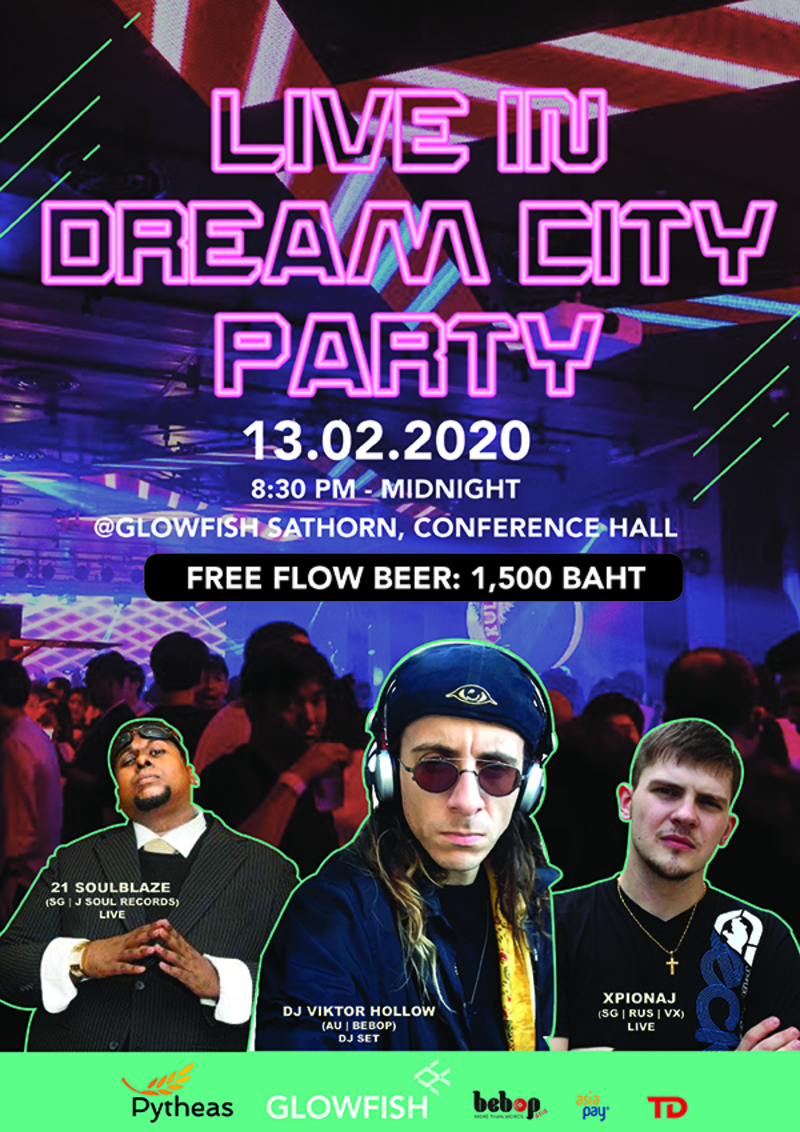 Glowfish is proud to present LIVE IN THE DREAM CITY party at Glowfish Sathorn from 8.30pm to midnight

Great news, Glowfish is bringing 3 amazing artistes to Bangkok! You’ve seen them on Youtube, now it’s time to see him live on stage for LIVE IN THE DREAM CITY party! Meet 21 SoulBlaze (SG | J Soul Records ), Xpionaj (SG | RUS | VX) and Viktor Hollow (AU | Bebob)
Agenda
8.30-9.50               21Soulblaze (SG | J Soul Records )
9.50-10.10            Xpionaj (SG | RUS | VX)
10.10-midnight   DJ Viktor Hollow (AU | Bebob)
Ticket: 1,500 baht
FREE ENTRY
Free flow beer from 8.30pm - midnight
Artistes detail
21 SoulBlaze ( SG | J Soul Records )
Singapore Hip Hop legend returned to S.E.A.
21 SoulBlaze is a songwriter, and a Hip-Hop artiste from Singapore, best known for his breakthrough pop single, "I Got You", which was the #1 hit on the US charts for 8 consecutive weeks with its music video airing on MTV Asia, MTV Thailand, MTV Philippines and VH1 India. His next single, “The Road Less Taken”, hit #1 on the MTV charts on its first week of release and remained in the top spot for 8 months. “The Road Less Taken” music video is listed as the most viewed music video on MTV of all time. The track has also received 2 nominations for “Best Hip Hop Solo Act” and “Best Electronica Song” at the 2012 VIMA AWARDS. 21 SoulBlaze was awarded with the “Best Hip hop Act” at the 2012 VIMA AWARDS and receive a lot of Publicity and apprences for this. The single will be featured in an upcoming film of the same name, starring 21 SoulBlaze.
21 SoulBlaze is not only much sought after musician but also a prolific host, actor and director. Currently the Creative Director for J Soul Records, he has directed and conceptualized many projects both locally and regionally.
IG: @21_soulblaze
youtube.com/jsoulrecords
#21soulblaze
Xpionaj ( SG | RUS | VX)
Russian Rapper representing the real side of Asia.
Xpionaj is a bi-lingual Russian hip-hop performer and song-writer.
Xpionaj has first made name for himself as part of the winning Duo, Vas & Pris to be crowed King of ‘the Dancefloor’ with his then partner Priscilla, by winning Singapore first reality dance TV show.
Few years later, he quickly handed himself as a solo artist in the club circuit by performing at venues such as Esplanade, Gotham Penthouse, Dempsey Road, Scape, and Home Club to name a few.
Deciding to stay true to his chord of diversity, Xpionaj decided to express what was unique to him. Often his songs introduce Russians to the ‘Real’ side of Asia, or provide social commentary on discrimination and cultural differences. Rather than be another typical tourist, Xpionaj flips stereotypes, and exposes false dogmas. This musical magnifying glass that Xpionaj presents is truly an international viewpoint that Xpionaj has morphed in his years of travel and tribulations.
Xpionaj
IG: @xpionaj
facebook.com/xpionaj
#xpisback
DJ Viktor Hollow ( AU | Bebop )
"DJs play 'good' sets every night. For most, it's enough. Play. Replay. "Good set bro".
In 2010, local sound was getting stale. Viktor changed that.
Bringing a signature hybrid electronica mix, he's as at home dropping Glitch-Funk as Dark DnB. His latest club material spanned French Death-Electro, Dubstep, Trap, and a mix of Crossbreed / Neurofunk that dropped jaws and slammed dancefloors.
Notorious for his club sets at (AU): Neon Crucifix, Solid State, Rapture (@ the Artifactory), Neko Nation, Dominate and Noizemachin (+ 100's of parties/doofs/raves/cons); 2020 marks his international debut. He's coming. Prepare to change. "
https://soundcloud.com/viktorhollow
https://www.mixcloud.com/ViktorHollow/
https://www.facebook.com/ViktorHollowDJ
#viktorhollow
#preparetochange 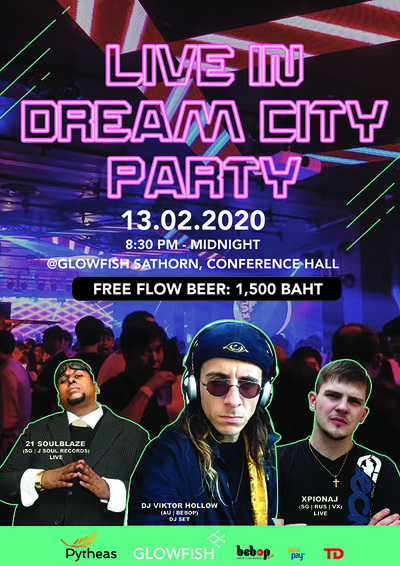 We provide attractive designed office spaces situated in convenient central locations in Bangkok. We take pride in our service, attention to detail and creative work spaces that we feel will provide the right environment for your company to grow.