We continue our ‘one night’ international comedian series with Canadian, Toronto-based comic JOE VU! After winning awards in advertising for a Superbowl commercial and a Ted Talks ‘10 Global Ads Worth Sharing’, Joe abandoned his lucrative career in advertising for stand-up comedy only to be totally disowned by his Asian parents.
Now a TV comic known as absurd, intelligent, and insightful, his routines are at once both entertaining and educational, and of course hilarious. Joe is one of the few Asian voices in the North American comedy scene, having performed on national television for The Winnipeg Comedy Festival seen on CBC COMEDY (a clip online went viral with almost 8 million views), on radio CBC for the Debaters and has featured in the prestigious JUST FOR LAUGHS Festival. His comedic skills have also been put to use in the writer’s room for the smash hit NETFLIX series KIM’S CONVENIENCE.
So come along and see JOE VU - LIVE IN BANGKOK for one night only and only at The Comedy Club Bangkok, with special guests! 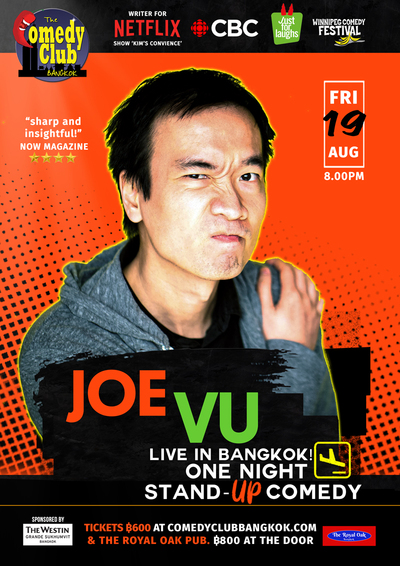