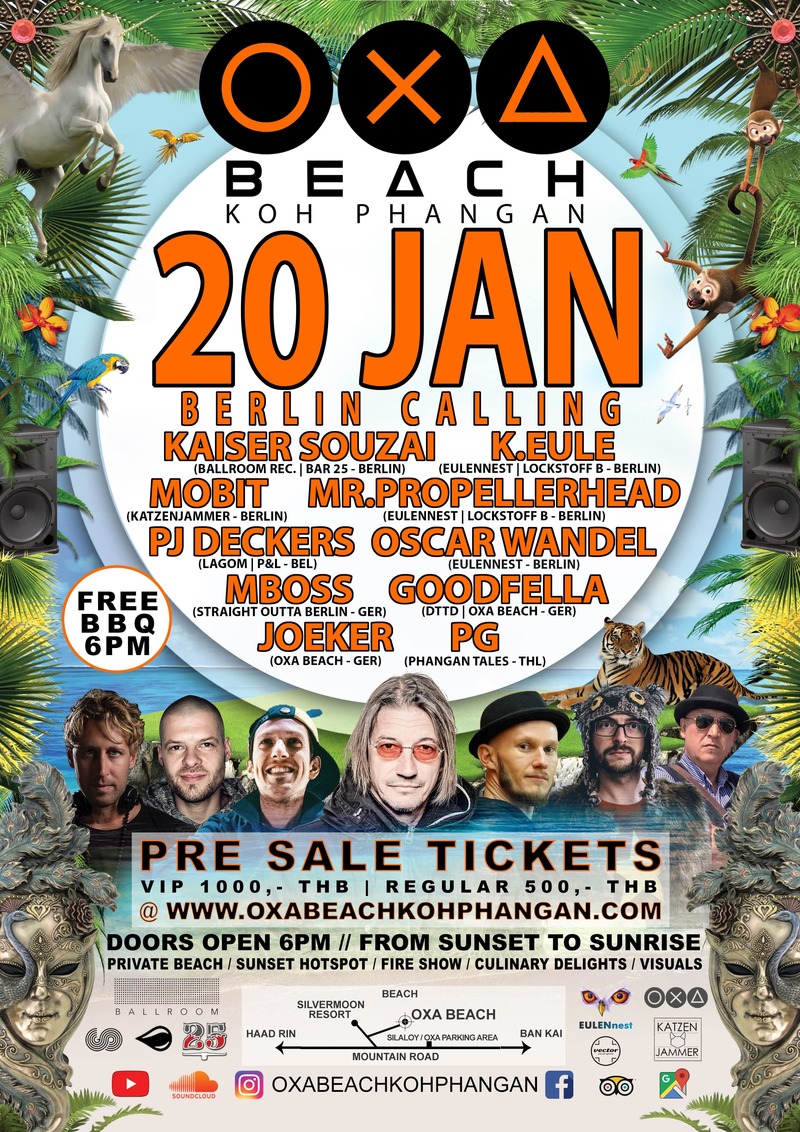 O X A will rise to us on MONDAY 20th JANUARY 2020 with our special edition,

Making concrete waves throughout the music underground and carving a reputation internationally with his live performance, popular event nights and taste-making record label Ballroom Records, Berlin based Kaiser Souzai is an unstoppable force within the industry. With the creation of his own musical genre of Art-rock Tech, drawing influence from 70‘s greats such as Pink Floyd, Genesis and Yes, yet still keeping his roots of deep and progressive techno, electrifying dancefloors across the globe.
Kaiser Souzai put himself on the electronic map initially with releases such as ‚Girl‘, which became a huge summer tune in 2006 with it‘s Pulp Fiction samples, and their Cloud series, ‚Altocummulus Floccus‘, ‚Stratocumulus‘ and ‚Cirrus‘. Remixing for Booka Shade‘s ‚Love Inc‘ on Blaufield and Dave Seaman‘s ‚Everything Comes in Threes‘ on Tulipa Recordings, alongside signature releases on Kinetika, Trapez and Definitive Recordings to name only a few, not to mention support from all the tastemakers including likes of Sven Vath, Joseph Capriati, Steve Lawler, Adam Beyer to name a few, the last years has seen Kaiser Souzai build a unique brand representing and creating that art-rock niche which has had critical reception from all over. Regularly featured in the electronic top 10 of various sales portals as Beatport, Kaiser Souzai has further solidified his name with the creation of Ballroom Records, a label which has grown from strength to strength with a taste-making roster that puts out some of techno‘s best new music alongside vibrant label nights that keep giving and giving.
Kaiser Souzai has introduced his live performance to the world. Each live show incorporates Kaiser Souzai‘s never-ending energy, show- casing his talent as musician with live electronic percussions in front of an eagerly awaiting crowd. He travelled from Belgium to Australia, Thailand to Berlin, gigging at the likes of Womb (Tokyo), Uberhaus (Beirut), Forsage (Kiev), Sisyphos (Berlin), Sullivan Room (NYC) Koi (Singapore), Jungle Experience (Koh Phangan), Circus (Melbourne) and Rhythm & Alps (New Zealand), with the end of their New Zealand tour seeing them headline the Techno Stage alongside the legendary Carl Cox.


∞ MOBIT ∞
(Katzenjammer Rec. - Berlin, Ger)
One night in a Bar somewhere in South East Asia I was watching a young backpacker. He walked straight to the barkeeper and asked him: „Hi there I´m DJ, can play here tonight?“. The barman shrugged his shoulders and said „yeah why not“. The guy set up is laptop and tiny controller and started to play techno.
A few days later my own tiny controller was on the way from Berlin to Bangkok. I travelled several month through South East Asia and took every opportunity to play in bars, beach party's and even on a festival. Since I am back in Berlin I do organize techno party's on my own and play in Berlin clubs on a regular.
My musical range is spread from 120bpm Progressive and Melodic House up to 130bpm straight and heavy Techno. Within my mixes I do always focus on a common theme which is characterized by constantly pushing, progressive sounds of percussions, melodic
elements and vocals. The intensity of my mixes depends on playtimes, locations and the crowd.
I am resident DJ at the Berlin event label „Katzenjammer“ and since April 2018 I am organizing techno party's in Berlin.
https://soundcloud.com/mobit bln
https://www.facebook.com/mobit.bln
https://www.instagram.com/mobit.official/
https://www.residentadvisor.net/dj/mobit

"Ick bin K.EULE aus Berlin!"
K.EULE [ ‘ka /oyleh/ ] is a German slang word for small brother in Berlin. The point between K and EULE [ /oyleh/ ] makes the word a little pun in German. EULE [ /oyleh/ ] is the German word for owl - he is a DJ, so obviously a night bird.
As a chick the young K.EULE fluttered through the Berlin nightlife and in 2012 he came to the point where just celebrating was not enough. He quickly got the basics and at the end of 2012 he made his first own musical flight tests at Brunnen70 Club in Berlin. From this point he played in the most different places of the city and beyond. Besides Germany he had performances in New Zealand, Australia and South East Asia. During his travels he expanded and refined his musical spectrum.
K.EULE is an energetic, motivated, honest and open-minded DJ and producer with a addiction for music. You can hear that when he starts playing. He is also known for his stamina, so he played in New Zealand over 22 hours at a festival.
Since January 2018 K.EULE regularly organizes the “Eulennest” parties in Berlin with his crew. The bunch of birds want to set new standards and create their own platform and definition for electronic music. Promoter is not enough for the bundle of energy K.EULE and therefore he founded his own label in January 2018 with the short and pregnant name: Lockstoff B

A bird of paradise from the heart of Berlin that exudes pure joy. Packed in the music he plays and as a presenter on the radio programs "Maxim's Monday Groove" on DeeRedRadio.
A confident young gentleman is playing on the roof directly above the rooms in Berlin:
Mr. Proppelerhead.

Mr. Proppelerhead can conjure up electronic sounds. Not with the trombone or the organ like other sound artists, but with the turntables. He is crazy about mixing and blending and is incredibly in love with the music.
But he's also a good friend in every man's ear at the same time! He helps you as well as he can to take you into the electronic sky, even without the help of a Proper hat.


∞ PJ DECKERS ∞
(Peace & Love | Lagom - Bel)
PJ’s passion for house music started at the young age of 15. In his home country Belgium he was enthusiastically collecting records and later he began to DJ as a hobby.
He moved to party island Koh Phangan in 2015 where he developed his signature sound, a blend of driving, melodic techno and tech house. Well thought-out music selection and flawless mixes are the reason why he became a well known DJ in South-East Asia’s electronic music scene and is booked today all over the globe.
You will find him every Sunday holding residency at Koh Phangan’s hottest underground party - The Peace and Love Sunday Sessions at Haad Yuan beach.
Facebook: www.facebook.com/pjdeckers
Soundcloud: www.soundcloud.com/pjdeckers
Instagram: https://www.instagram.com/pj_deckers/
Resident Advisor: www.residentadvisor.net/dj/pjdeckers